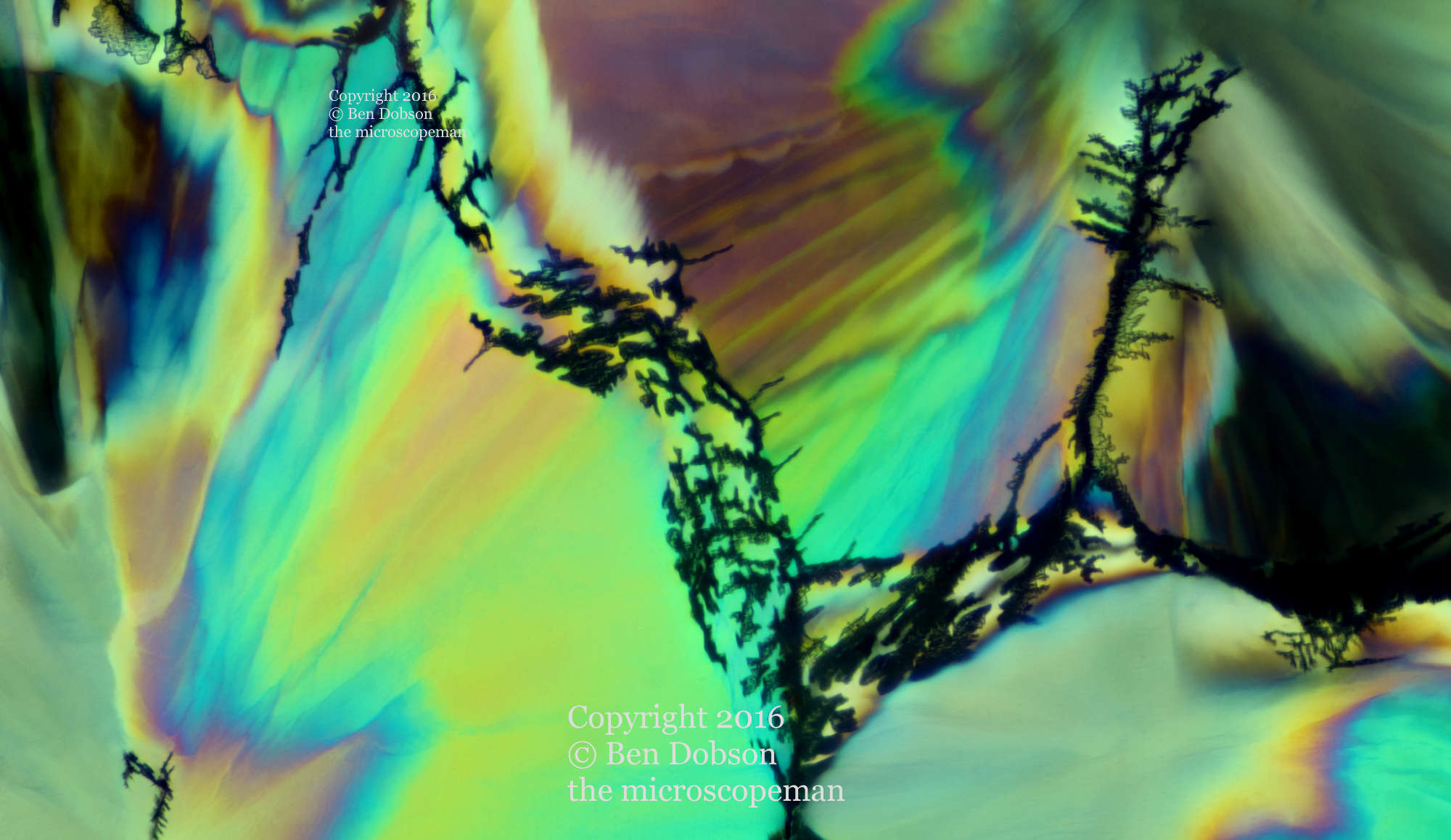 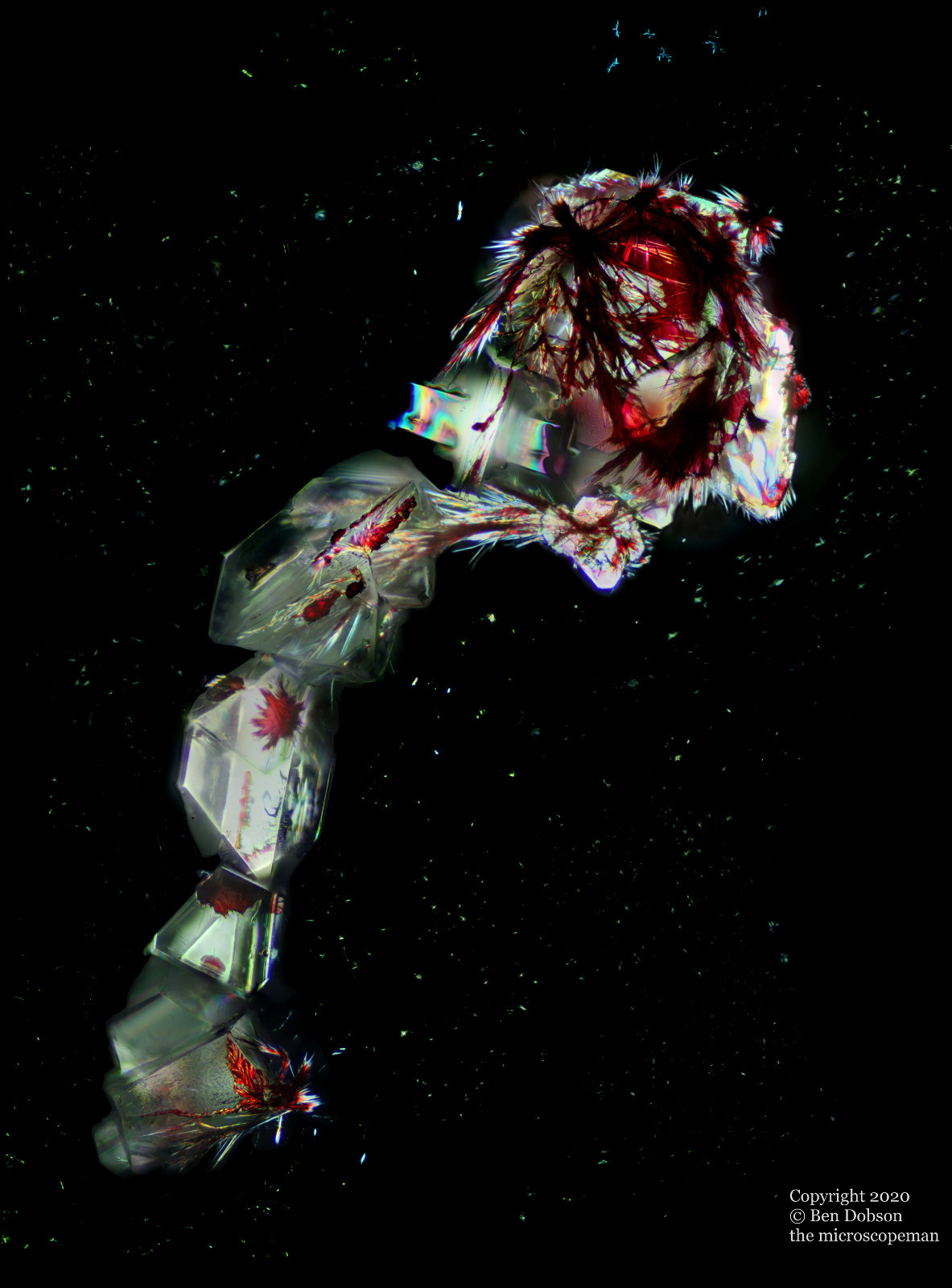 I hope to have created a surrealist interpretation of a personification of the Scorpio. The view can see what they will, but perhaps the face of an angry entity with a segmented scorpion tail. I often use the detritus on the slide to create a star field and this works well with this image.

I am always interested in exploring the Magritte inspired idea of “this is not….” as this is in reality this is a still life of crystals of picric acid, acid fuchsin and alanine (an amino acid) created through the laborious and skilful process of stacking and stitching around 2000 images (part algorithmic, part slow and mechanical).

It is not abstract art, it is not surreal art, but it is both these things; it is not what is seems and what it seems is hard to describe. 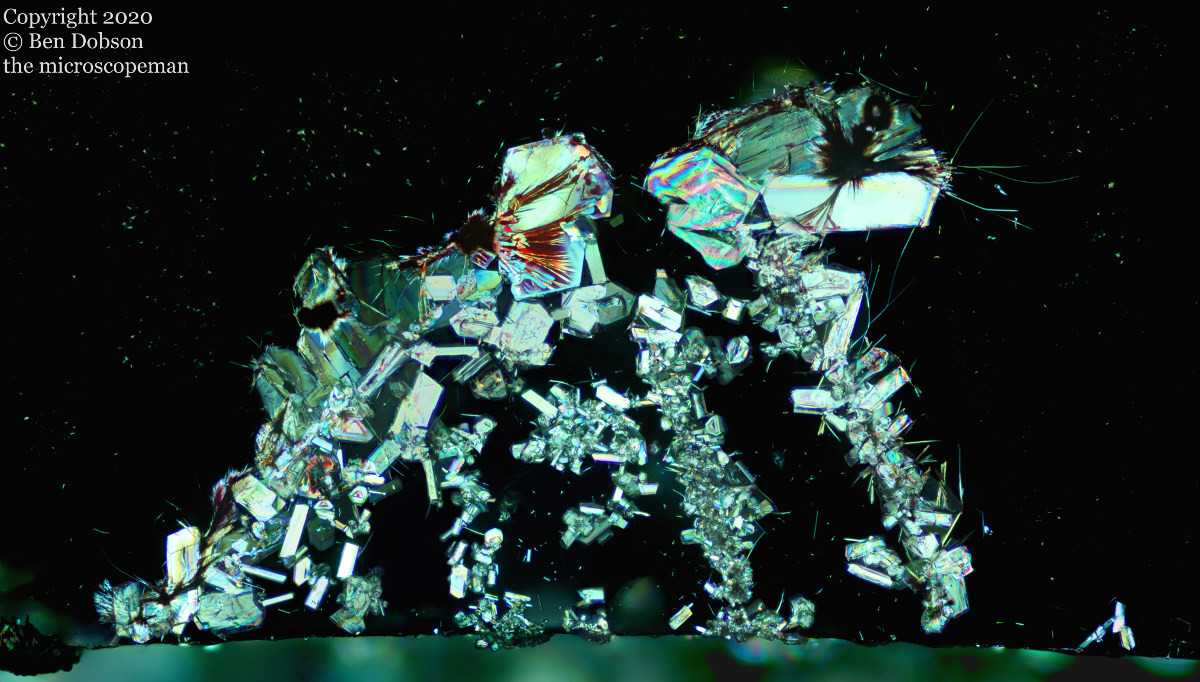 A cosmic version of star wars AT AT walker. Picric acid, acid fuschin, alanine crystals shot using around 600 images and polarised light at x200 magnification.
The viewer can see what they want but to me this walking animal of some kind that looks a bit like the star wars walkers. I definately think this one is a boy. 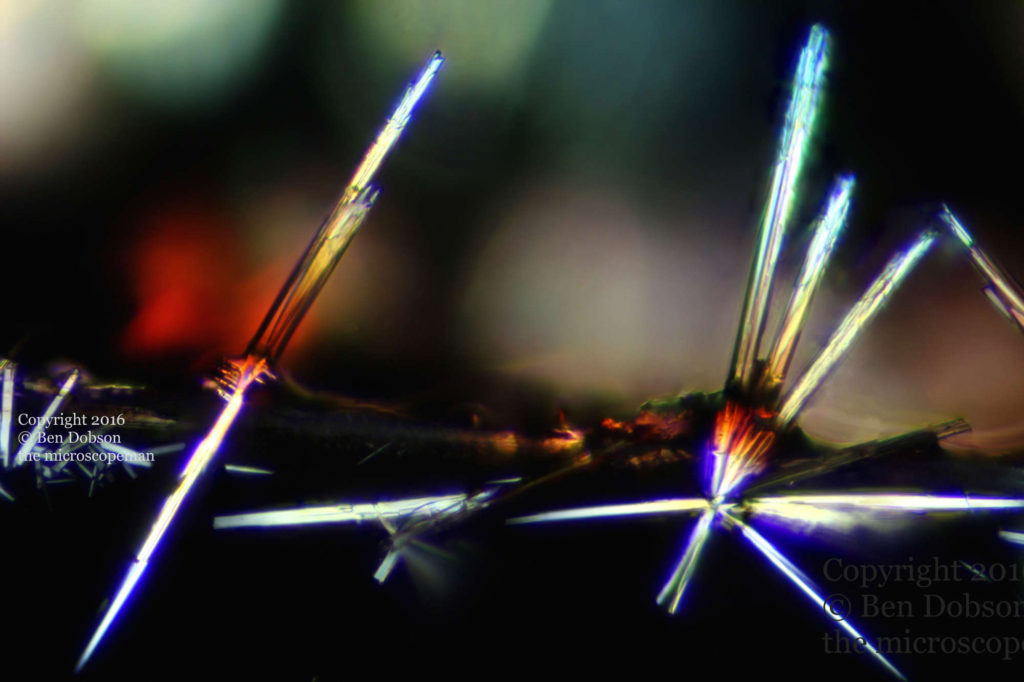 “Needles of lime” are crystals of citric acid embedded in the red stain saffarinin. The image, like all the mineral images shown here were photographed between crossed polaroid filters. This was originally magnified 200 times.

“Crystaline Feathers” was photographed at x200 magnification. The citric acid was mixed with another stain, Van Gieson’s stain which contains picric acid. I think, based on seeing the patterns that picric acid crystals sometimes forms that is mainly picric acid. Can be 3.6m wide.

“Crystal Shore on a Far Away Place.”

Picric acid and acid fuschin, which form Van Gieson’s stain which is used to stain tissues containing collagen such as ligaments.
A possible view from a exoplant. Can you see the hooks that seem like strange gates, perhaps ruins from ancient an civilisation. 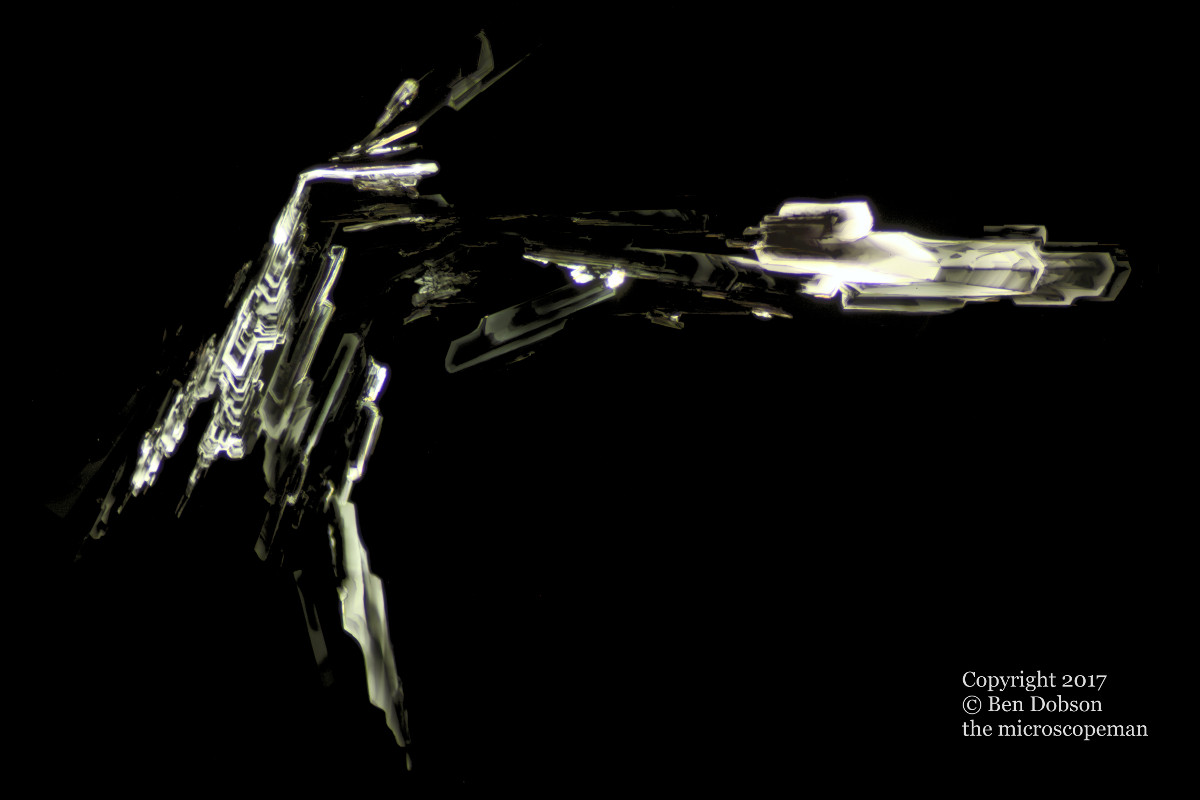 From a slide made from Benzoic Acid, Citric Acid and Orange G (a stain used to stain plant and animal tissue) in a 50/50 methoxyethanol/ethanol solution. As you will see from the following exactly which of these substances was responsible for the the subtle coloured image is hard to tell. Can be 1.5 metre x 1 metre.

This is more representative of the same Benzoic Acid, Citric Acid and Orange G slide. This one can be 2.5 m wide. 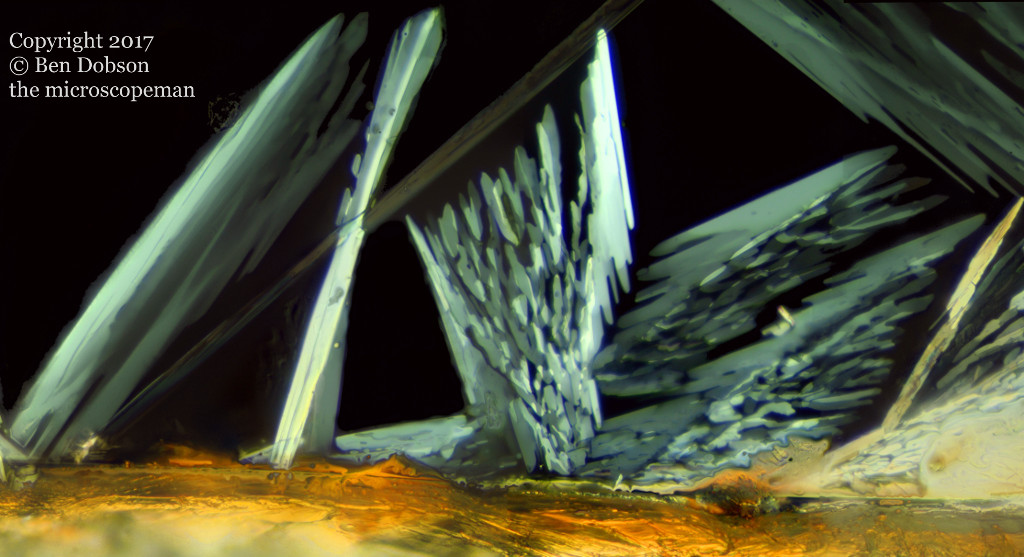 Over the edge the grey towers rose.

More from the Benzoic Acid, Citric Acid and Orange G slide. A Crystal plant fossil? No I’ve already told you what its made from. 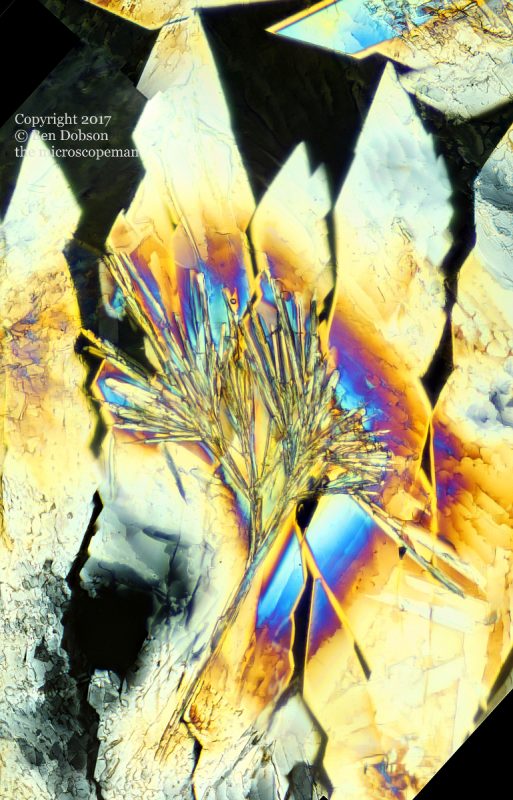 “Three Choirs of Angels Doing Battle with the Fallen” 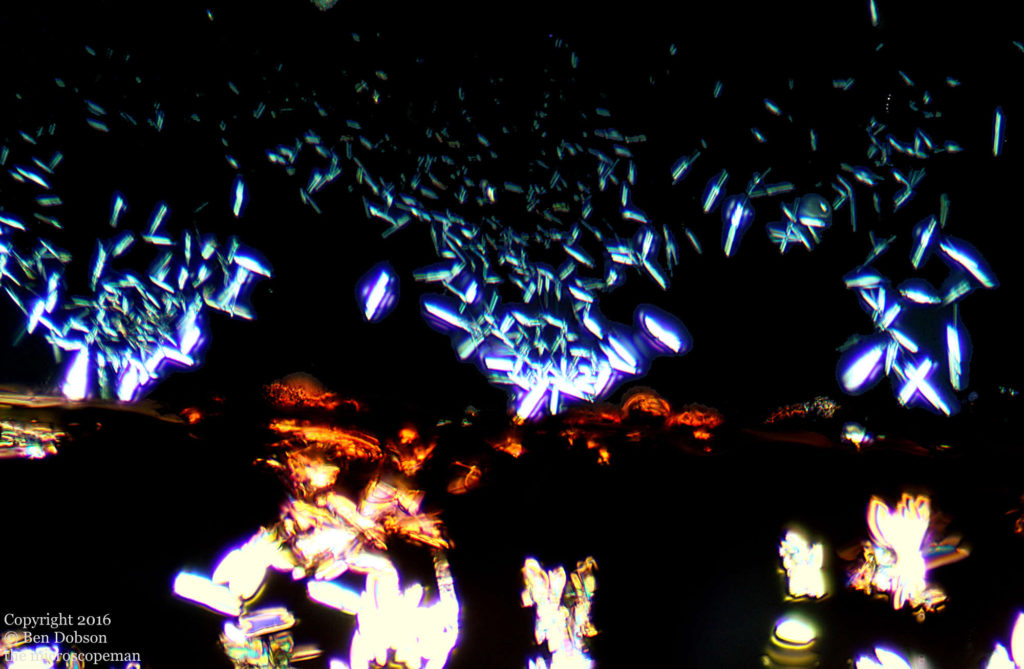 Slides of crystals often have fascinating shapes and forms and occasionally we can project some meaning to these. Here the first interpretation might be some fallen (red coloured) angels doing battle with three choirs of angels from above; or perhaps that’s lightning with fairies beneath. One is only limited by imagination. 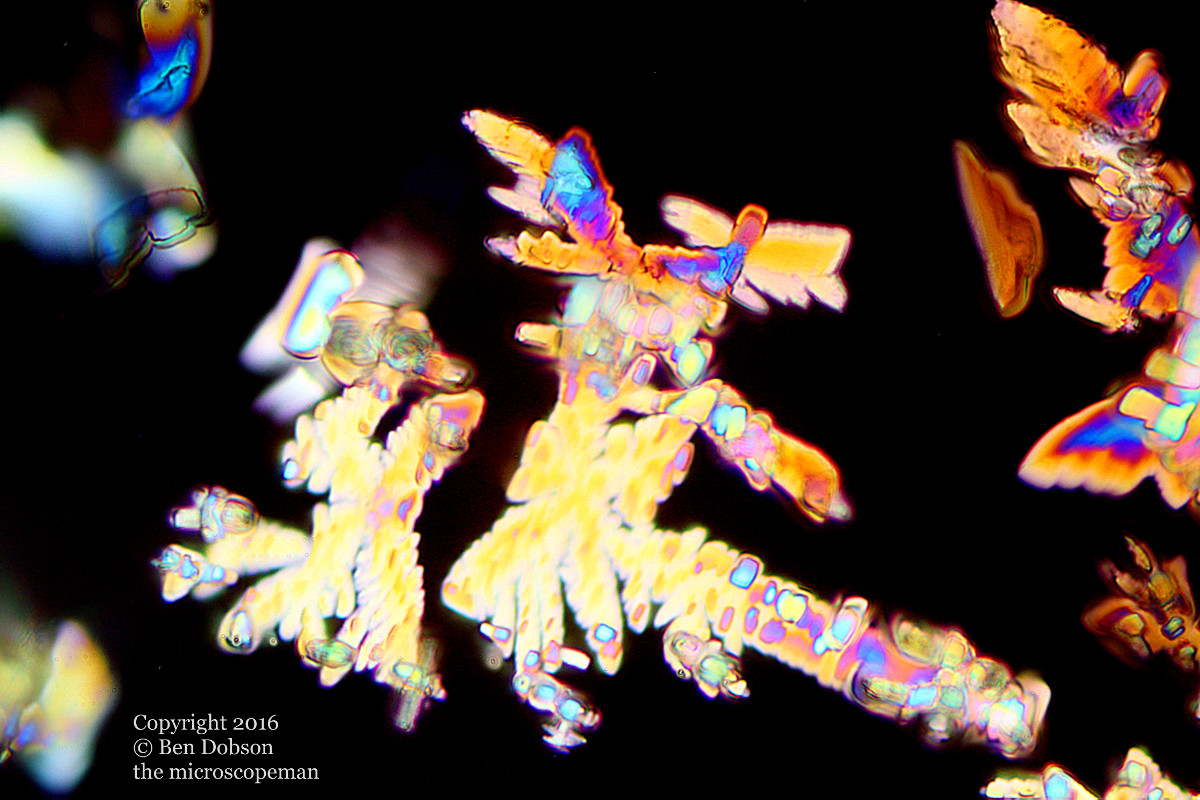 To me the two central citric acid crystals look like dancing angels or perhaps Shiva performing the Ananda Tandava, the dance of bliss. Traditionally Shiva dances with a personifcation of the river ganges, perhaps the small crystal by his side.

Of course it could also be Hades which would tie in nicely with the Three Choirs of Angels doing Battle with the Fallen. Maybe the fallen have come from here…

Not far from this (same slide, just along from the purple volcanoes) are, 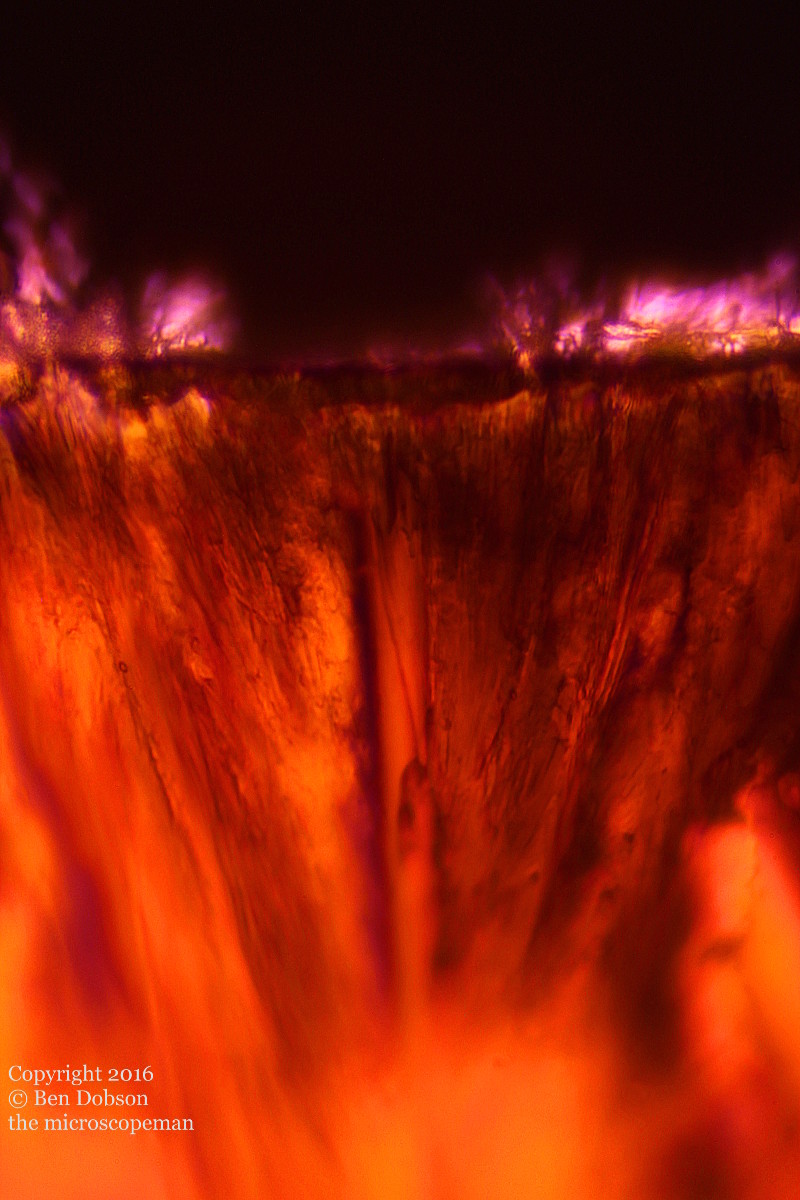 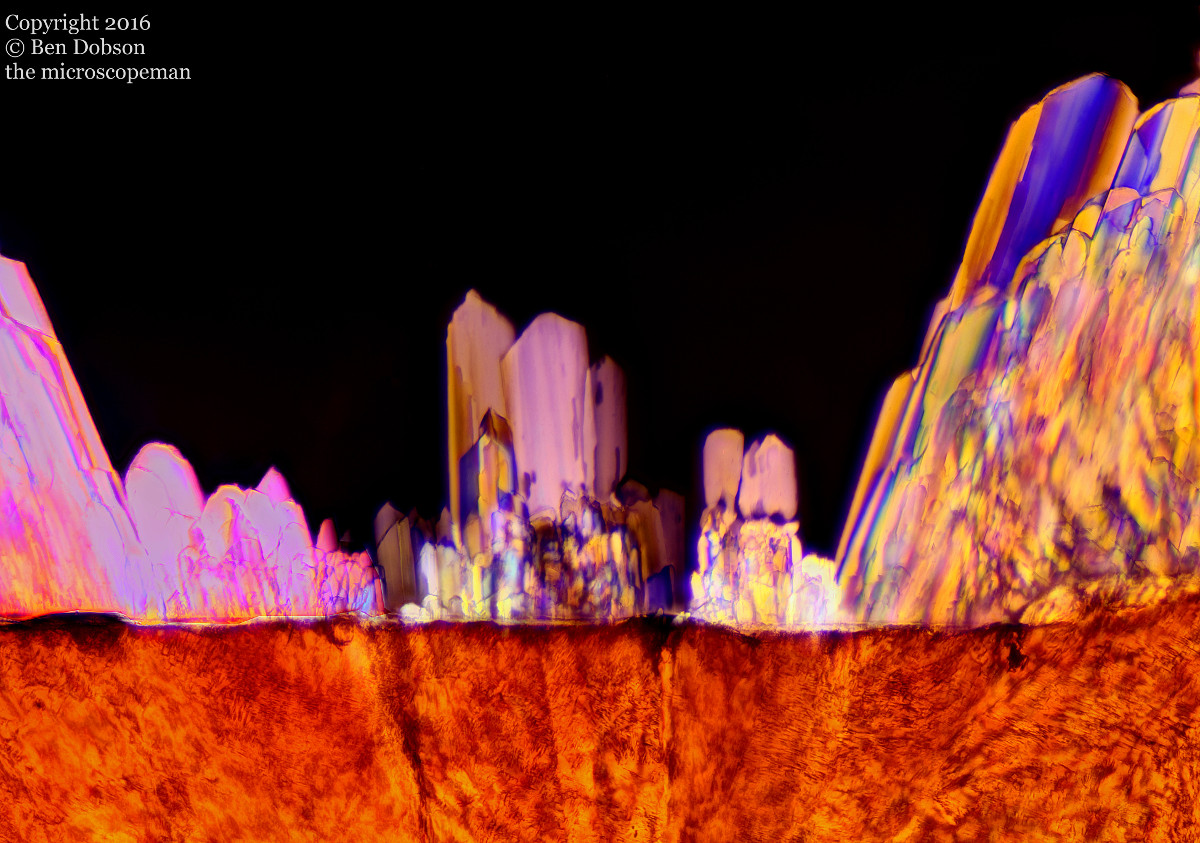 Perhaps the abode of the Queen of Crystal Trees. Acid fushin and picric acid. Taken using polarised light at my favourite magnification, x200.

“The Interplaner Tree” is made from Ammonium Sulfate which was heated to 243 degrees Celsius to melt it. It was then allowed to cool and crystallise. Some crystals have more than one refractive index when viewed with polarised light, meaning light rays will travel along different paths through the crystal. The waves of the different rays interfere with each other creating beautiful colours like oil on water.

The dark parts of the image are faults, air, where separate crystals collide but do not tesselate.

“The Queen of the Crystal Trees.”
She can be printed up to 1.2m tall.

On the crystal tree theme…. 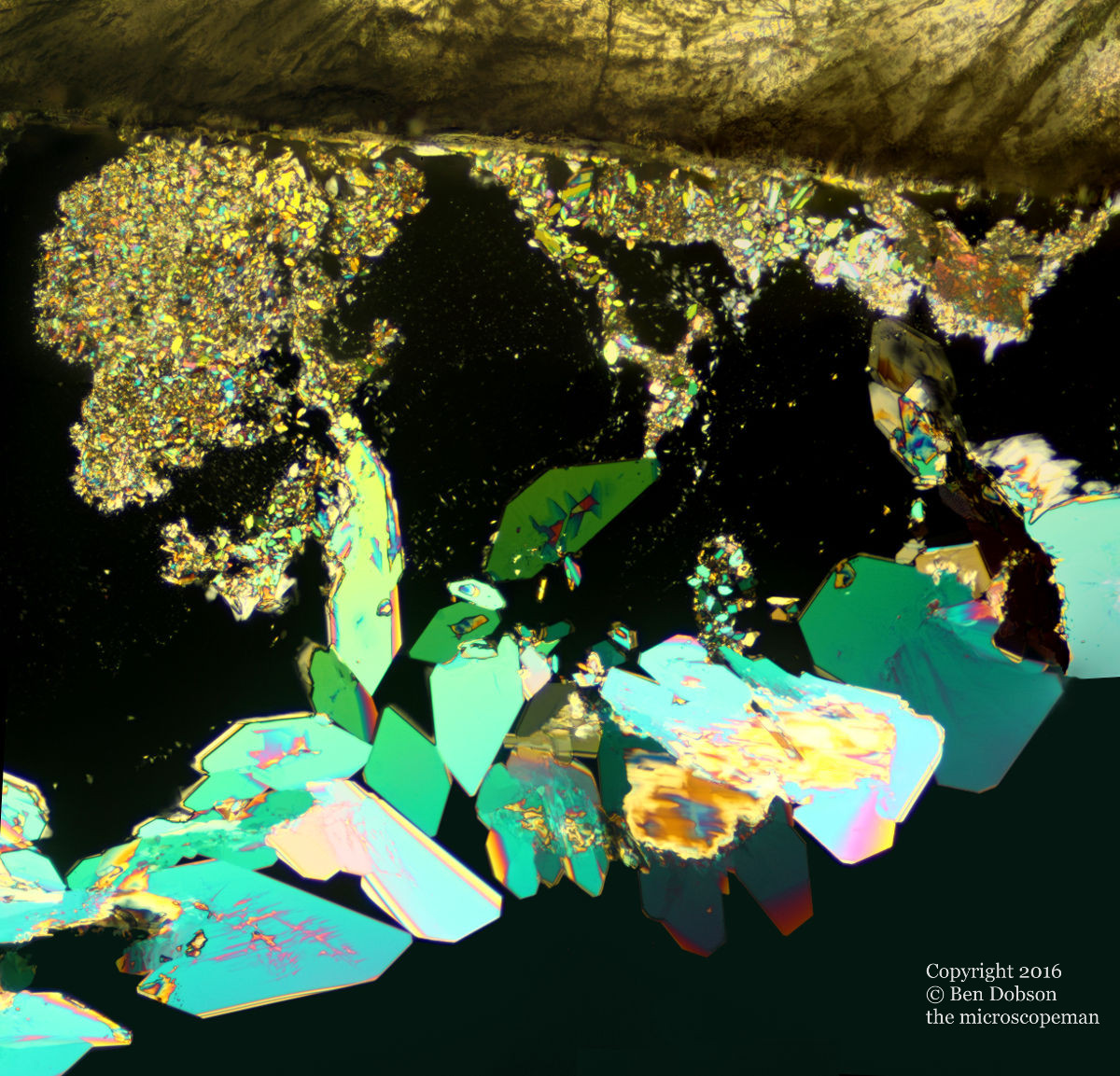 The crystal tree is made via a slide prepared with saccharine crystals.

I like the slightly surreal nature of the image. Can you see the red/yellow eyes staring from green crystal face in the centre? Or the small figure walking, perhaps holding a tray, like a character from Mario platform game that has, perhaps, crashed?

Polarised light at x 200. A composite of about 300 images. Ammonium Sulfate crystals show powerful birefringence as explained under the “The Interplaner Tree”. I like the almost 80s feel you get from saturated colours (the colours really looked like this). 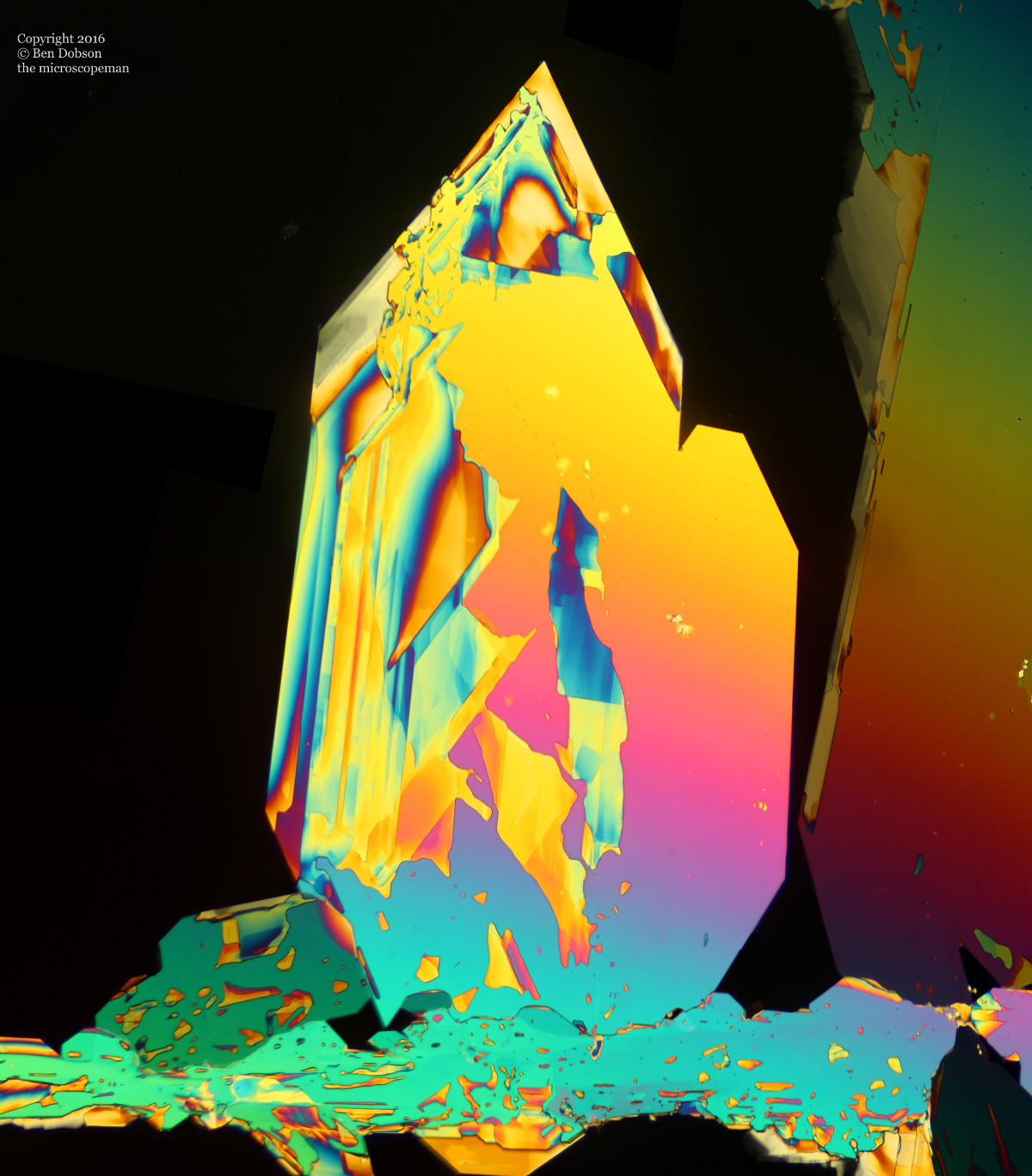 More from a slide made using saccharine crystals. This one at x 200. Sometimes people in the crystal art world ( this is a fairly small world) refer to these colour contours as “Iron Butterfly”. This, along with the appearance, inspired the name. 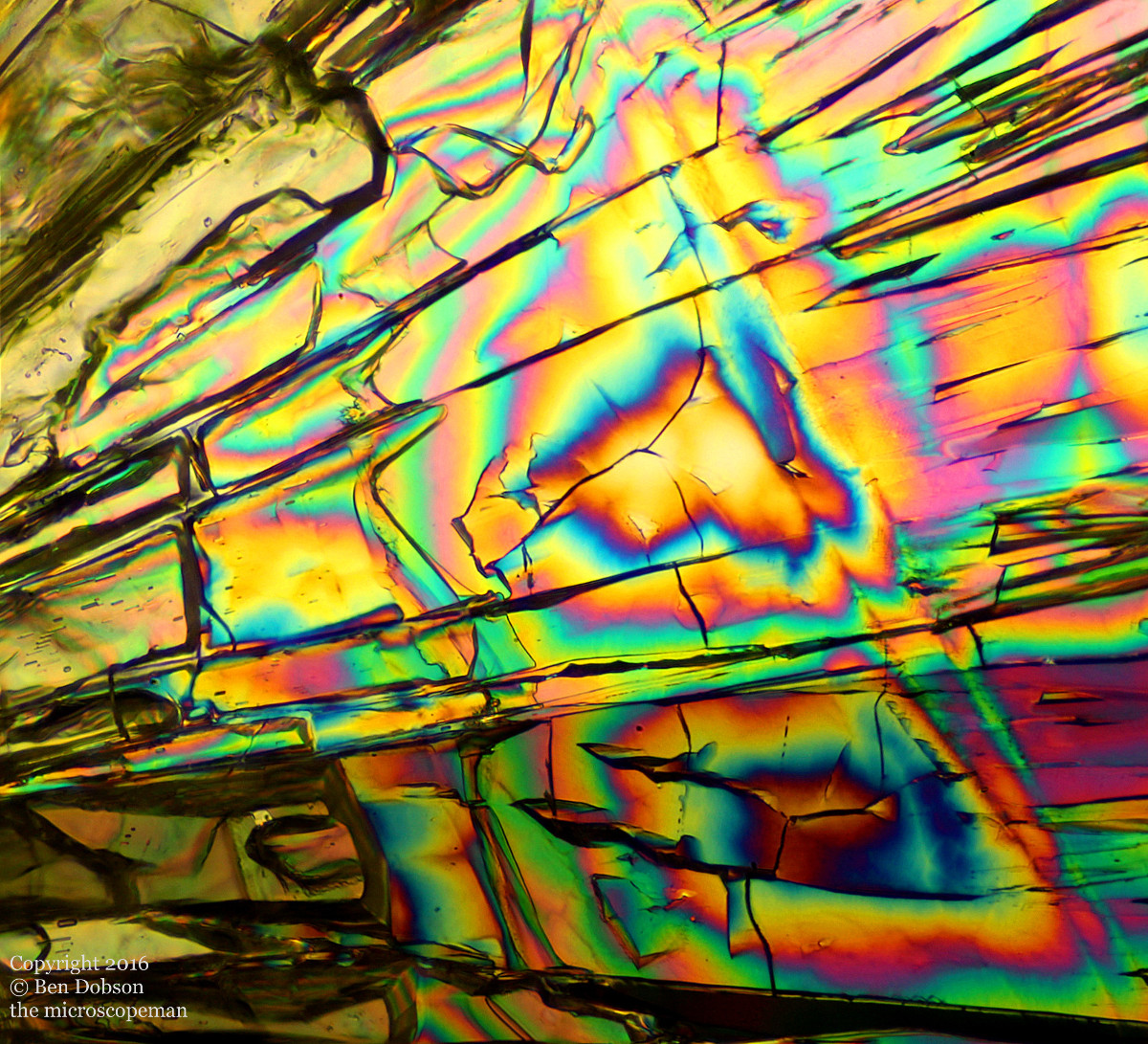 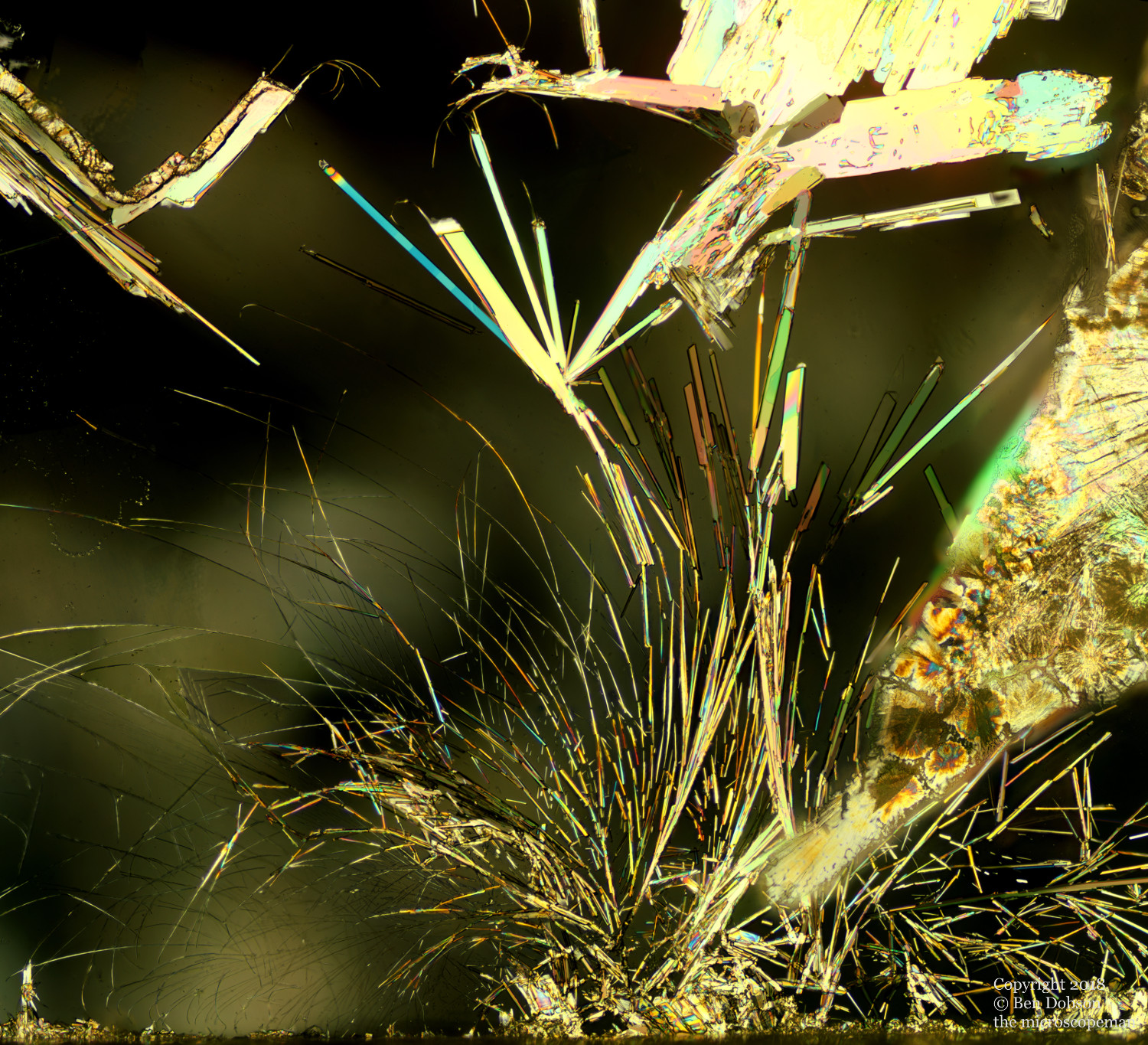 Last of four images made by a slide of Saccharine crystals. This can be printed 2.5 metres was made from 4000 images and took a about 300 hours of work to bring together. I had to leave to alone for a year after the first 200 hours as I reached an impasse in the stitching process. I’m gained some technical skill in the intervening year and came back and finished it off. 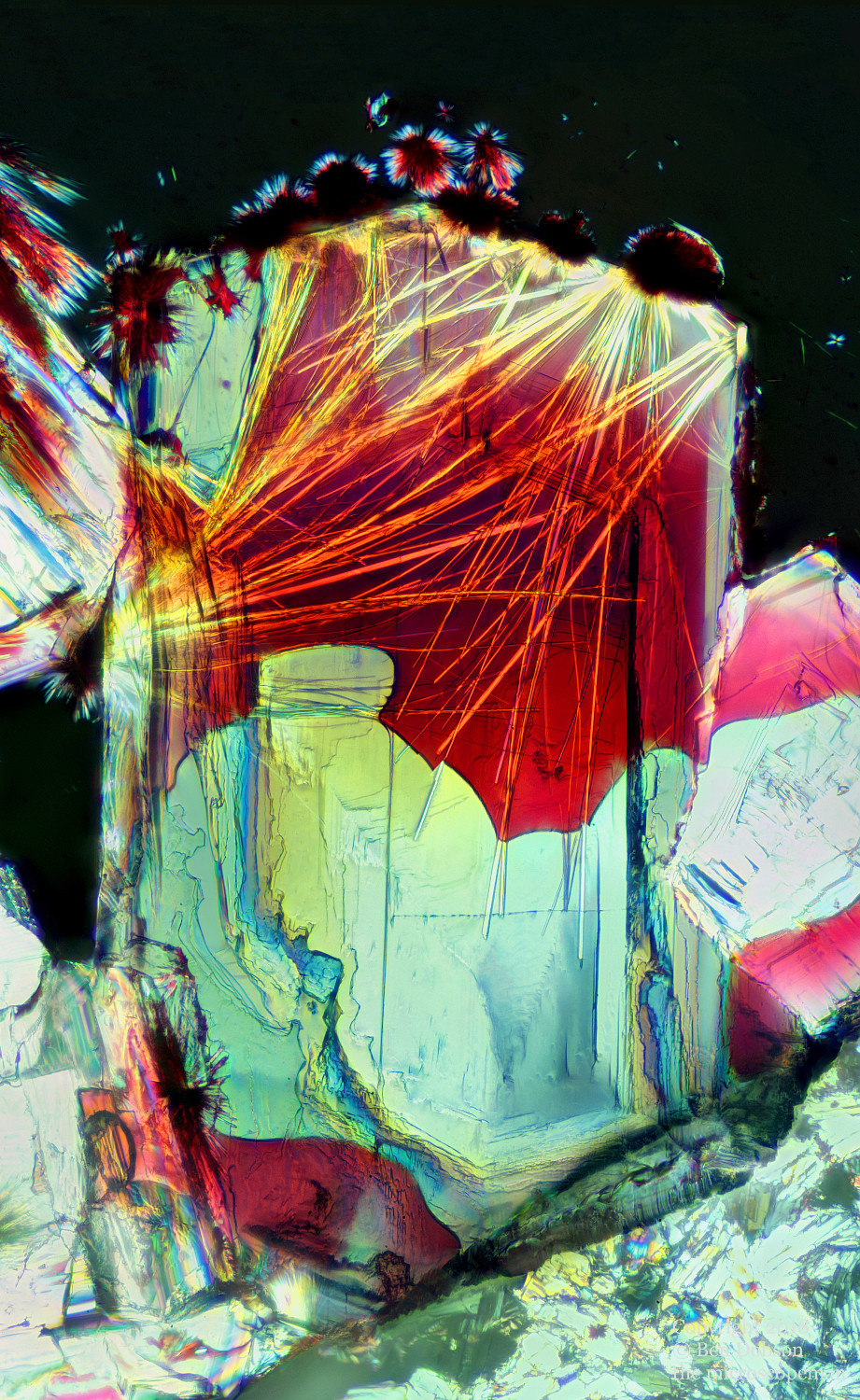 “It Came From Atlantis” 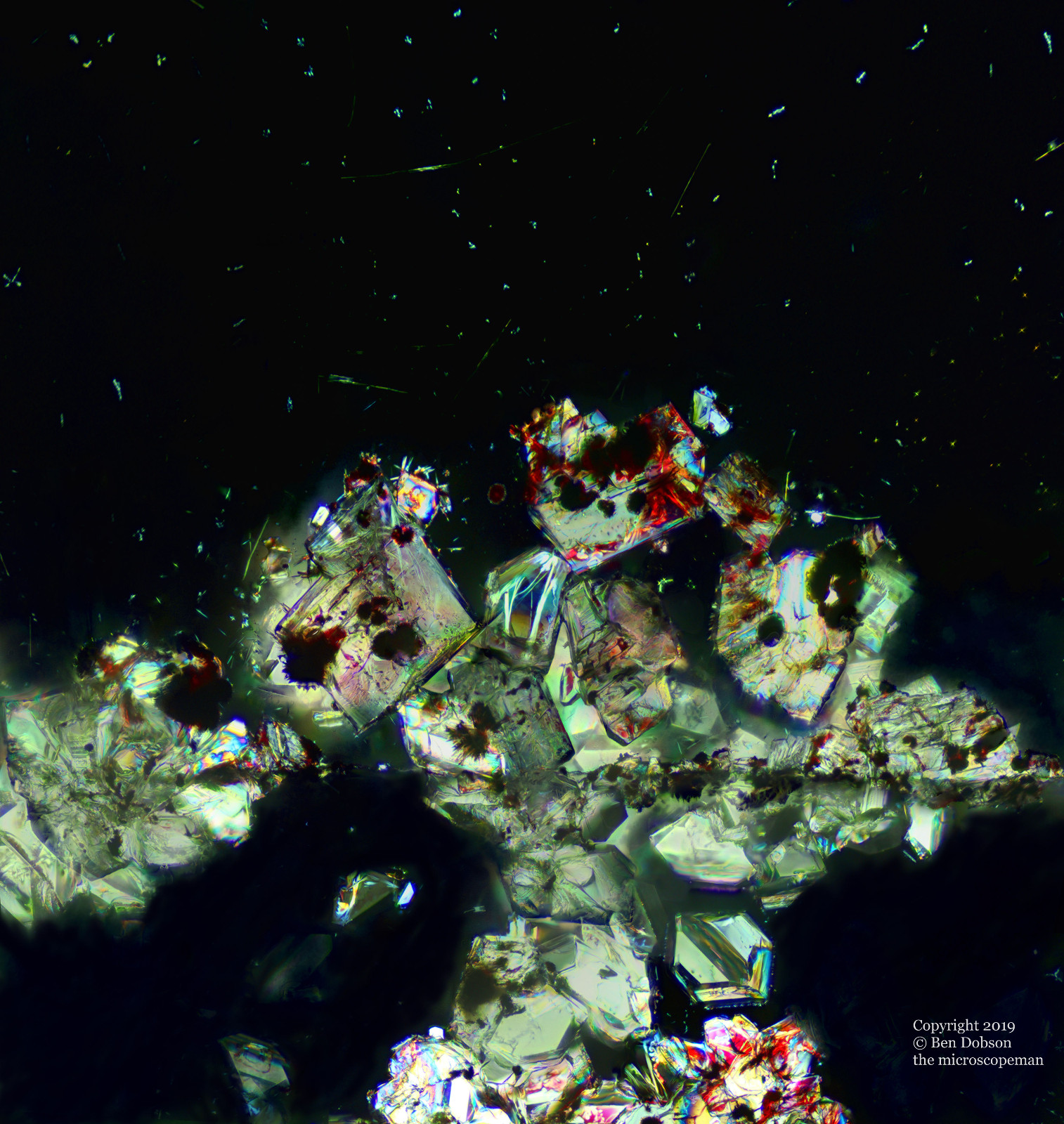 Another image using Acid Fuchsin, Picric Acid and Alanine Crystals, shot at x200 using polarised light. Around 2500 images stacked and stitched. Could be printed up to around 2m. 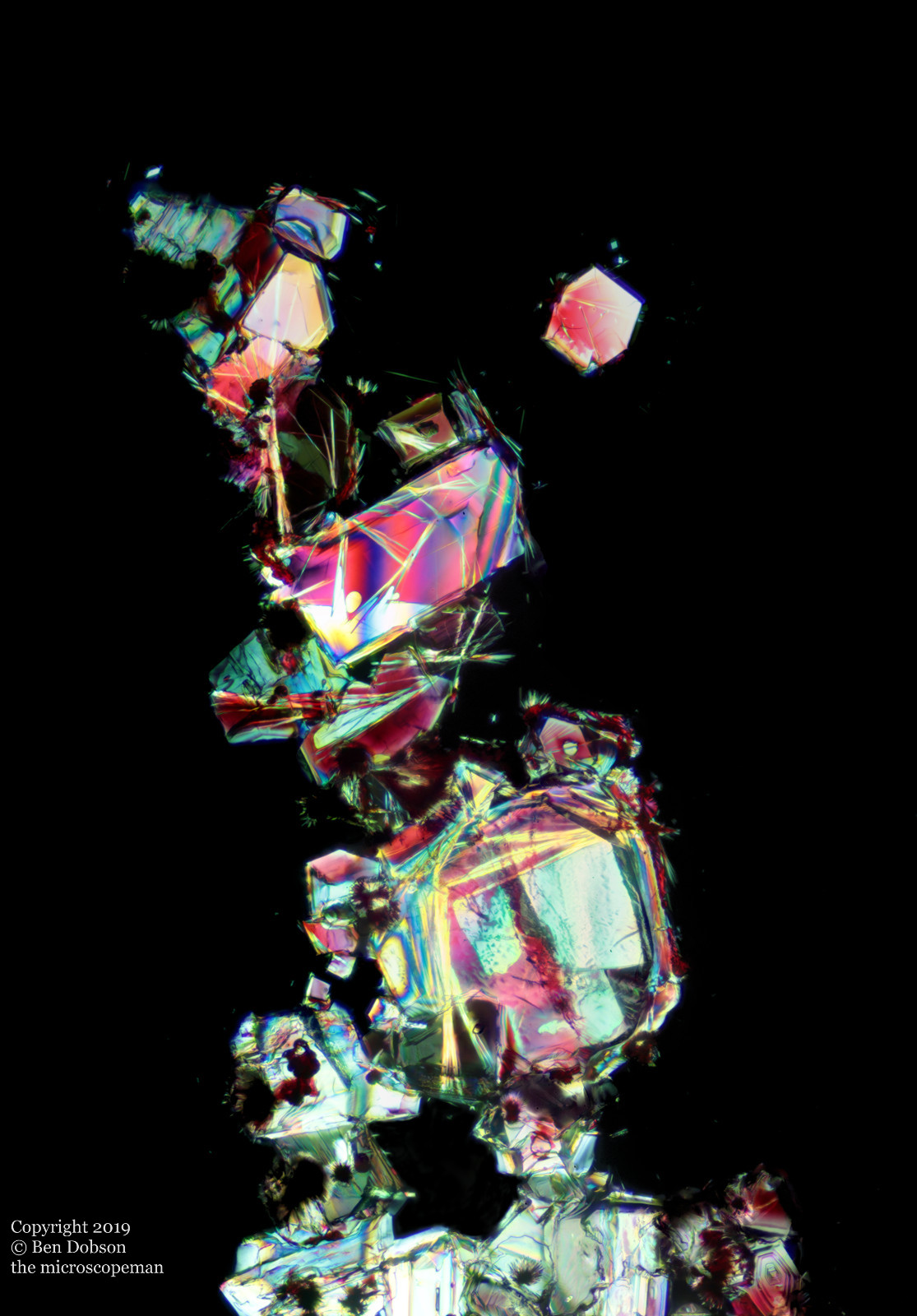 More Acid Fuchsin, Picric Acid and Alanine Crystals, shot at x200 using polarised light. About 1900 images focused stacked and stitched. Some people see a robot in the image. What do  you see? 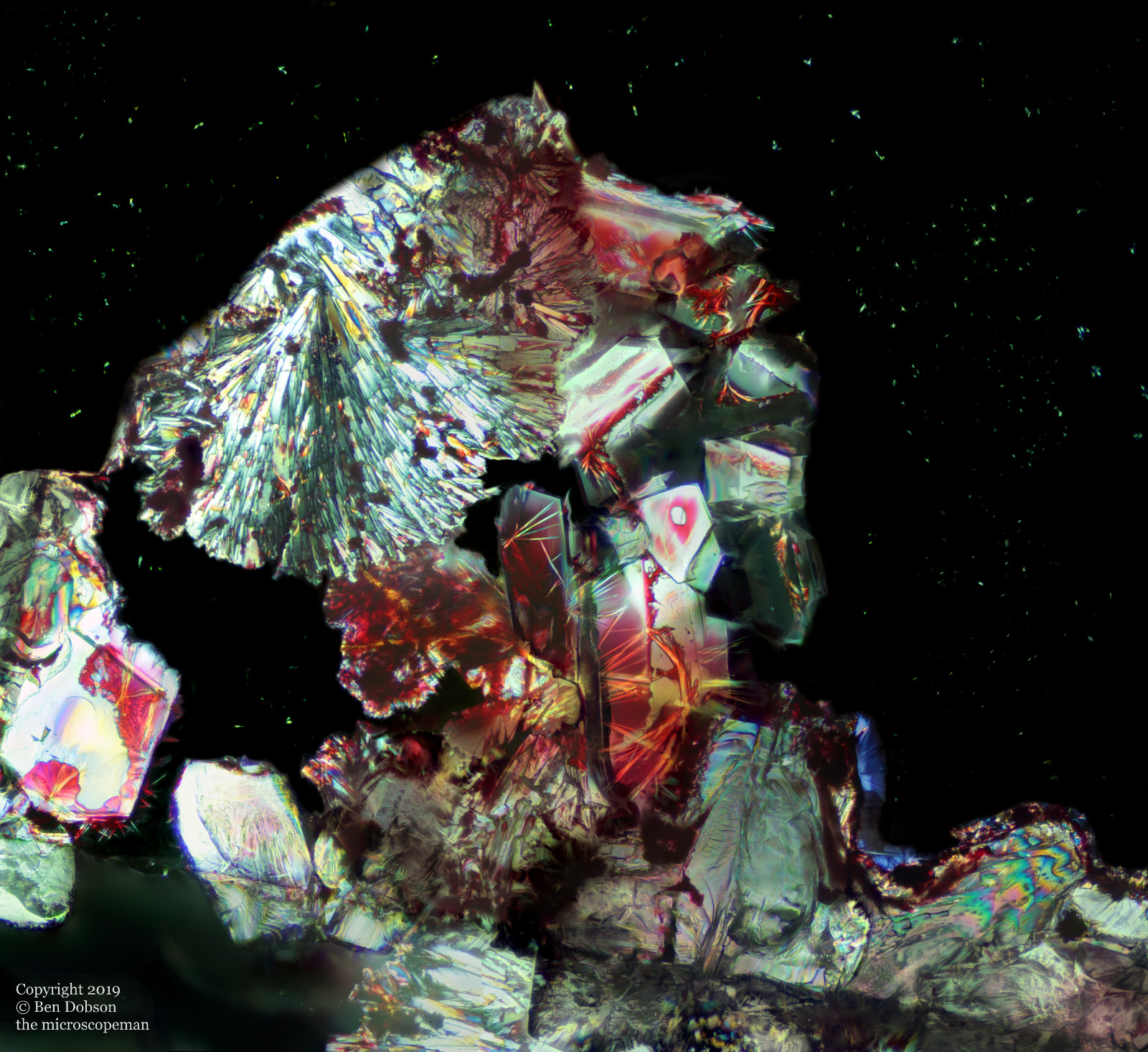 The image above is a composite of about 1500 image stacked and stiched shot a x200 using polarised light. Perhaps another part of Atlantis rising from the sea, but feel free to see what ever you see.

Its not just crystals that have beautful colours.

This is part of a colourful screw thread of a zinc passified crew. The screw is 10 mm wide and about 50mm long although the image is of about 8mm of its length. Taken with x4 fluor objective, total magnification was x80 and using regular reflected light.